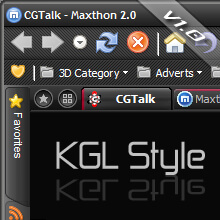 Designed for Maxthon2 web browser back in 2006, I wanted a slick dark GUI theme that was better than what was available. It racked up a lot of downloads and many fans when it was published on Maxthon’s skin extensions website. Some of the default theme icons in the above screenshot later got replaced with original alternative pack aswel (don’t have that anymore). However the color from the default icons  worked so well with darker theme and most users were already accustomed to what the icons did in functionality that it got left in the main download pack.

With Firefox 3.5 introducing CSS3 support and gaining better render support and more extensions, I decided to switch browsers. The custom themes made for Firefox 3.6-40 have never been published, really they never did entirely match upto the design and polish of this skin. Though they came close but with Mozilla constantly breaking Firefox GUI in a stupid effort to try match up with Chrome’s dumbed down frontend browser design really put damper on things. As it kept Mozilla breaking the best parts of Firefox’s end user customization. So I simply stopped trying to fix what would always likely be broken in ever new Firefox update that started getting a much more rapid release cycle. 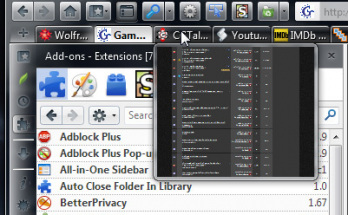 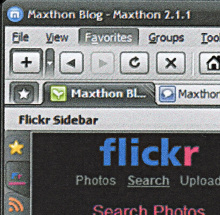