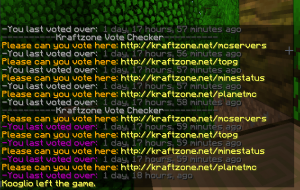 Not my first java plugin (I keep finding new things I’ve done that are years old now but eventually I’ll get around to digging up all the things I’ve done with Java and put them down in the portfolio, some of them just don’t have pretty screenshots to show how they worked at least from the end users side.)

So this server mod just displayed voting information and provided a very useful reminder to players as to when they could vote for the server again for rewards, providing the end user with a timestamp of when they last voted, and an alternate display that showed how long they had to wait before they could vote again.

Tying together different sources of player data. The server plugin would check a players voting information using the API of another popular voting plugin for Bukkit servers that is required by many of the voting list sites. Then using a MySQL database it would store all the results in Kraftzone.net own setup for storing player data. Probably the first time I had used Java and Mysql based connections, before my experience of using Mysql was interfacing with it via PHP for websites.

I thought about selling the plugin at spigot.org for a little amount seeing as it was still alot better than most of the free ones, and offered alot of customization through the config file., but given it was used by Kraftzone.net it was one of the many mods I did that added the custom style and value that KZ players came to enjoy about the server so exclusive it remained. 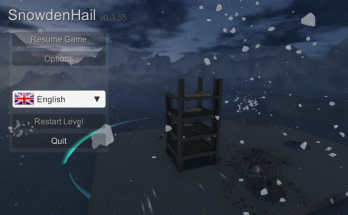